The Romsey and Southampton North seat was formed for the 2010 General Election, after an independent review by the Boundary Commission.

Most of the constituency’s population live outside Romsey, with approximately 20,000 of the electorate residing in the two wards of Bassett and Swaythling, which are within Southampton City. The remainder of the 68,000 electorate live within Test Valley Borough, either in Romsey town itself or in the many beautiful Test Valley villages.

From Southampton:
Bassett and Swaythling. Including Glen Eyre and Wessex Lane Halls of Residence for University of Southampton. 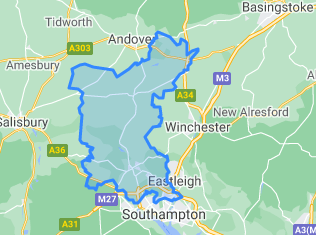 The constituency has given birth to many notable people, such as Rev. W Awdry, an accomplished author, railway enthusiast, and the man who wrote the ‘Thomas the Tank Engine’ children’s books. Perhaps the constituencies most famous resident was Florence Nightingale, who is buried at East Wellow, after having received a calling to nurse injured soldiers whilst sat under a cedar tree on the family’s Embley Park Estate, now the site of Hampshire Collegiate School.

The constituency is made up of many beautiful hamlets and villages, and is a wonderful location for tourism, close to the beautiful and historic cities of Winchester and Salisbury. The constituency is an area of outstanding beauty with parts of it falling into the New Forest National Park, and boasts some of the best trout fishing in the world.

The University of Southampton is just outside the constituency, but many of the halls of residence fall within Romsey and Southampton North. Chilworth is the location of Southampton University Science Park, and in Swaythling the largest employer is Ford, where the Transit is manufactured. The constituency is also is home to the Army Air Corps and the School of Army Aviation at Middle Wallop.

Although officially a mixed rural/urban constituency, the majority of Romsey and Southampton North is found within the boundaries of Test Valley Borough, and is largely rural. Stretching over 25 miles north to south, from Chilworth, Nursling and Swaythling in the south, to Longparish, Wherwell and Chilbolton in the north.

The Constituency was formed from much of the former Romsey Constituency, and Romsey itself is a historic market town of 15,000 residents dating back over a thousand years. Found on the banks of the wonderful river Test, and built around the world famous Abbey (based upon the foundations of a Saxon church which was sacked by the Vikings in 993), the town was given its first charter by Henry 1st in the 13th centuary, and another Charter by Charles 1st just over 400 years ago. Romsey was badly hit by the Black Death, killing half the population, whose main industry was the production of wool. Romsey is of course famous for the Broadlands Estate, home to Lord Mountbatten of Burma, the last Viceroy and first Governor General of India, who after his murder in August 1979 was buried in Romsey Abbey.

If you would like to get in touch or get involved, please contact us on 01794 512 132 or email office@romseyconservatives.co.uk

Alternatively, if you would like to raise an issue with Caroline Nokes MP, her details can be found here: www.carolinenokes.com